“Five Books for Believers Struggling with Unanswered Prayers” – At Christianity Today, Jason Hague, author of Aching Joy: Following God through the Land of Unanswered Prayer, shares a list of five recommended books that help us grapple with unanswered prayer. Perhaps most interesting to me is that, along with books on prayer, Hague suggests two fiction works, C. S. Lewis’ The Last Battle and, one of my favorite books, Cormac McCarthy’s The Road. McCarthy is not for the faint of heart, but, then, neither is unanswered prayer. Read Hague’s complete list here.

“No Country for Old Age” – Over at The Hedgehog Review, Joseph E. Davis writes about the the devaluation of old age in our society, despite advances in care for the aged through Social Security and increases in caring facilities. “In our society, to come directly to my point, old age is understood and framed in ways that lead inevitably to its devaluation. Its status is low and arguably is falling. On its face, such a claim might sound preposterous. Surely, the opposite is true.” 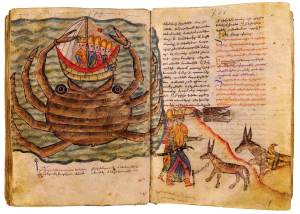 “The Prophets, Angels, & Churches of ‘Armenia!’” – “One small display in an exhibition can grab you by the collar. In the case of ‘Armenia!’ at the Metropolitan Museum, it was the image of a spherical wide-eyed crab in a ridged armor swallowing Alexander the Great, along with his ship and retinue, set against a wavy sea that might have been drawn by a child. It is attributed to Zak‘ariay of Gnunik and appears in an illuminated manuscript of the Alexander Romance (1538–1544), the legends surrounding the exploits of Alexander the Great, much loved by Muslims, Orthodox Christians, and Armenians alike. Dr. Helen Evans, the Met’s curator of Byzantine Art, told me, ‘That crab is too good not to be recognized as the type of art we don’t expect from East Christians.'”  [Thanks to Micah Mattix for sharing this in the Daily Prufrock.]

“Antisemitism Is Our Problem” – As Christians we must wrestle with the way that antisemitism has often taken root in Christianity. Editor Samuel Loncar reflects on Christianity’s antisemitic legacy over at the Marginalia blog of The Los Angeles Review of Books. “Most Christians today will think of the ‘God of the Old Testament’ as harsh, perhaps even cruel, a judge, to which they contrast Jesus as loving and kind. This is a form of Marcionism, one of the earliest and most anti-Judaic heresies that claimed Jesus has nothing to do with Judaism, that he and his God were a revelation of pure love in contrast to the stern God of the Jewish people. No serious reading of either the Old or New Testament can justify such a contrast, yet it is perhaps the dominant way most Christians will think of the relationship between the Old and New Testament. This is one of many reasons that antisemitism is our problem, for we are a culture shaped by Christianity.”

“Giant Damien Hirst uterus sculptures catch eye at Qatar hospital” – “Fourteen giant bronze sculptures by British artist Damien Hirst graphically charting the moment of conception to birth greet patients arriving at an $8-billion hospital in Gulf state Qatar. The vast open-air installation, named “The Miraculous Journey”, shows a foetus growing in the womb and culminates with a 14-metre (46-feet) of a naked baby just after birth. The monumental work is the centrepiece of an impressive modern art collection at the Sidra Medicine Hospital, officially opened this week in Doha, that would be the envy of many galleries around the world.” [Thanks to Christina Edmondson for sharing this link.]