“How the World Lost Its Story” –  In this article published in 1993, theologian Robert Jenson, who died in 2017, reflects on the ways in which the great story of God builds meaning into the church living in the postmodern world. While the article is more than twenty-five years old, it still speaks with power. “So how, with respect to ‘story,’ must the church’s mission now be conducted?…The obvious answer is that if the church does not find her hearers antecedently inhabiting a narratable world, then the church must herself be that world.”

“A Damnable Shame“– Mark Mulder reflects in Comment Magazine on the church’s complicity in racism with reference to Jemar Tisby’s recent book The Color of Compromise. “Tisby’s volume offers a striking distillation of how the church in America has consistently demonstrated both tacit and explicit support for a racialized society. Though he describes the American church’s history with race as no less than a ‘horror,’ Tisby also insists that ‘to look away’ has become untenable. Hopefully, many people who care about the church will read The Color of Compromise and remember that Tisby’s book is ‘not about discrediting the church or Christians.’ Rather, they will notice its lineage with those who ‘speak the truth in love.’ True reckoning for the church on issues of race undoubtedly includes detailed retelling of disquieting truths that echo into the twenty-first century.”

“Lent Doesn’t Make Sense When Incarnation > Salvation” – Over at Mockingbird, John Zahl writes about the ways in which Lent is tied in not merely with the theology of the incarnation, but also with a good theology of salvation. “Today it seems most voices in the Church (at least the one to which I belong) seek to advocate a message about the human self that aligns almost exactly with the shallow philosophies proffered in any issue of Cosmopolitan Magazine. Cue the preacher who interprets loving your neighbor as yourself as being about, well, loving yourself. Under the auspices of ‘Incarnational’ language, the individual is deified. The true self is equated with the divine, and this is assumed to be a profound approach, and not that of every Montessori teacher/college drop-out. God-as-self is the most basic (#Basic) and misleading path in the world. The pursuit of it is the pursuit of self-interest: spirituality without humility. The assumption seems to be: ‘I must increase so that God might increase””

“Listen to T.S. Eliot Reflect on Poetry” – “On December 4, 1950, two years after winning the Nobel Prize in Literature, T.S. Eliot stood behind a lectern in the Kaufmann Concert Hall at the 92nd Street Y and read some of his best work in front of hundreds of people. Now the whole world can relive that moment: The 92nd Street Y has unearthed a never-before-heard recording ahead of a listening event on Monday night at 7:30 p.m. celebrating the Unterberg Poetry Center’s 80th anniversary.” 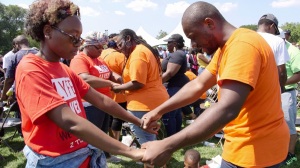 “Court Overturns Atheist Victory Against Pastors’ Best Benefit” – “For the second time, a popular tax break for pastors has been judged permissible under the US Constitution, despite efforts by an atheist legal group to prove otherwise. Today the Seventh Circuit Court of Appeals overturned a lower court’s 2017 ruling that the Clergy Housing Allowance violates the First Amendment. Offered only to ‘ministers of the gospel,’ the 60-year-old tax break excludes the rental value of a home from the taxable income of US clergy, CT previously reported. GuideStone Financial Resources has called it the “‘most important tax benefit available to ministers.'”