“Rethinking the History of Religious Freedom” – Church historian Robert Louis Wilken offers this helpful essay on religious freedom at First Things. “What is missing in these accounts is the contribution of Christianity. Many believe that Christianity is inescapably intolerant, and that only with the decline of religious faith in western society did liberty of conscience take root. But a more careful examination of the historical record shows that Christian thinkers provided the intellectual framework that made possible the rise of religious freedom.”

“Catechesis for a Secular Age by Timothy Keller with James K. A. Smith” – Catechesis  is the process of introducing new converts or those preparing for baptism or confirmation to the essential teaching of Christ and the apostles, usually with the help of a catechism. There has been increasing attention given to the need for catechesis within the church across a wide spectrum of traditions or denominations. In this 2017 article, Jamie Smith interviews Tim Keller about the need for catechesis in what Canadian philosopher Charles Taylor has dubbed “a secular age.”

“Can We Believe?: A personal reflection on why we shouldn’t abandon the faith that has nourished Western civilization” – Speaking of a secular age, here is Andrew Klavan’s personal reflection on the inadequacy of the Enlightenment narrative and the need for something beyond that like Christian faith. This meandering journey takes him into the prevalence of unbelief in the contemporary era and into the necessity of belief for the fabric of morality and society. Along the way, Klavan touches upon the work of Jordan Peterson, Douglas Murray, Marcello Pera, Steven Pinker, Yuval Noah Harari, and many more. He writes: “The point of this essay is not to argue the truth of Christianity. I argue only this: the modern intellectual’s difficulty in believing is largely an effect created by the overwhelming dominance of the Enlightenment Narrative, and that narrative is simplistic and incomplete.” 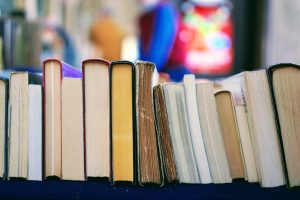 “Thirty Years, Thirty Books | Fiction: The Pleasures of Obsolescence” – As part of their celebration of the one-hundredth issue and thirtieth anniversary of Image Magazine, the editors asked a poet, novelist, and essayist to offer their top ten works in their area over the past thirty years. Melissa Range offers a list related to poetry in “Poetry: A Word We Have Not Heard.” Christopher Beha offers his list of novels in “Fiction: The Pleasures of Obsolescence.”  Morgan Meis offers a list of essays in “Love, Hate, and Digestion: A Miscellany.”

“Farewell Franchise Ministry” – There are moments as a pastor where you feel out of sync with the surrounding ministry culture. Multisite is one of those areas for me where incarnational theology seems at odds with the prevailing model of multisite through video venues. We have been discussing at Eastbrook whether it’s possible to move into a more incarnational family of churches model within urban environments; something we affectionately refer to as missional multisite, although I don’t really love that terminology any longer. I know there are churches that have done so, and now here is another.

“Megachurches Discovering Liturgy & Traditional Christianity?” – In light of the previous article, Gene Veith’s recent post about evangelical megachurches moving toward liturgy and Christian tradition makes sense. Veith’s post is a response to Anna Keating’s article for America, entitled Why Evangelical megachurches are embracing (some) Catholic traditions. Veith corrects some misunderstandings of Keating’s article, while providing some background on why churches like New Life Church, The Village Church, and Willow Creek are now integrating ancient Christian practices and liturgy into their church life.

Music: Nils Frahm, “All Melody,” from the album All Melody.