“Want to Get Into the Christmas Spirit?: Face Into the Darkness” – Advent is one of the most necessary seasons of the church calendar. It helps us from the pervasive consumerism and triviality in our culture related to Christmas. Advent gives us space to reflect, to prepare, to call out to God, and, as I’ve written elsewhere, to recover the wonder of Christmas. Here is Tish Harrison Warren writing in The New York Times about her own journey with Advent: “To practice Advent is to lean into an almost cosmic ache: our deep, wordless desire for things to be made right and the incompleteness we find in the meantime.”

“Church Unearthed in Ethiopia Rewrites the History of Christianity in Africa” – “In the dusty highlands of northern Ethiopia, a team of archaeologists recently uncovered the oldest known Christian church in sub-Saharan Africa, a find that sheds new light on one of the Old World’s most enigmatic kingdoms—and its surprisingly early conversion to Christianity. An international assemblage of scientists discovered the church 30 miles northeast of Aksum, the capital of the Aksumite kingdom, a trading empire that emerged in the first century A.D. and would go on to dominate much of eastern Africa and western Arabia. Through radiocarbon dating artifacts uncovered at the church, the researchers concluded that the structure was built in the fourth century A.D., about the same time when Roman Emperor Constantine I legalized Christiantiy in 313 CE and then converted on his deathbed in 337 CE. The team detailed their findings in a paper published today in Antiquity.”

“Vatican Holds Private Screening of Terrence Malick’s ‘A Hidden Life'” – I know you’re probably getting ready to see Star Wars IX: The Rise of Skywalker, but let me present a cinematic alternative. One of the most intriguing and moving films I have ever seen is Terrence Malick’s Tree of Life (2011). Since that time, I have delved into Malick’s other films, which are a one-of-a-kind experience of stream-of-consciousness and imagistic cinematography, laden with nature and themes of transcendence. Tree of Life engages with themes of nature and grace, which recur in some of his more recent films, although without the same effectiveness, in my opinion. Malick’s most recent film, A Hidden Life, focuses on the centers on the real-life story of Franz Jägerstätter, and debuted on December 13 (although it is very difficult to find a local viewing because of limited release).  Malick’s first film since 2007, it is reputed to be one of his most powerful, engaging deeply with themes of politics and faith. Perhaps it is for this reason that the Vatican requested a private viewing of the film, which the notoriously reclusive Malick actually attended. 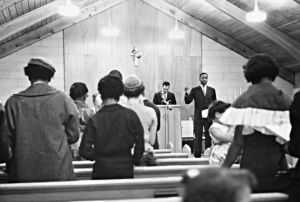 “American Salvation: The Place of Christianity in Public Life” – The conversation about faith and the public square, which Malick’s film raises, is one of the most pressing conversations in our contemporary American context. Should the church engage or withdraw from politics? Whould the church subvert or transform culture? What does it mean to engage with these questions at all? Albert J. Raboteau, professor emeritus of religion at Princeton University, and a convert from Roman Catholicism to Orthodoxy, weaves an interesting tapestry around this discussion, engaging with the American civil rights movement, early Christian political dissent, sacramental theology, and much more.

“Solar Light of the World: Evangelicals Launch Global Clean Energy Campaign” – “Through a campaign called Project 20.’25, the World Evangelical Alliance (WEA) has set out to get 20 percent of its members to convert fully to clean energy by 2025. This fall, the global network announced its partnership with Smart Roofs Solar Inc. Together they will help universities, health care facilities, and churches looking to adopt clean power, including offering guidance for local suppliers and providing financing options. The renewable energy initiative builds on the WEA’s efforts to promote creation care, said Chris Elisara, director of the WEA Creation Care Task Force.”

“Ready for Silence” – Poetry helps us encounter the familiar in a fresh way through rich use of language that makes what we already know become unfamiliar and new. Madeleine L’Engle, perhaps best known for her novel, A Wrinkle in Time, and related books, offers us a poem, “Ready for Silence,” that helps us re-approach Advent and the Christmas Story.

Best Books of 2019 – This is the time of the year that “best of 2019” lists of all sorts arise. I haven’t assembled my own list like this yet, but may do something like that in the next couple of weeks. In the meantime, here are a few lists about the best books or reads from 2019 that you might enjoy: Christianity Today‘s “2020 Book Awards,” John Wilson’s “A Year of Reading: 2019,” Scot McKnight’s “Jesus Creed Books of the Year 2019” (including a most disappointing book of 2019), Russell Moore’s “My Favorite Books of 2019,” The Englewood Review of Books‘ “Advent Calendar 2019 – Best Books of the Year for Christian Readers!,” “The Gospel Coalition 2019 Book Awards,” The New York Times‘ “Times Critics’ Top Books of 2019,” and LitHub‘s compilation of best of lists in “The Ultimate Best Books of 2019 List,”