“The Bold Architecture of Chicago’s Black Churches” – Daniel Hautzinger at WTTW: “Most people probably imagine a particular archetype when they think of a church: an imposing stone edifice or white clapboard building, a towering steeple, stained glass. But what about an old hat factory with glass block windows? That’s First Church of Deliverance in Bronzeville. Converted into a church in 1939 by Walter Thomas Bailey, Illinois’s first licensed African American architect, and the Black structural engineer Charles Sumner Duke, the building is clad in cream-colored terra cotta with horizontal red and green accents. Bailey and Duke doubled the width of the factory and added a second floor while remaking the interior into a stylish sanctuary, with a cross on the ceiling illuminated by colored lights and Art Deco touches. Two Art Moderne towers that flank the entrance were added in 1946 by the firm Kocher Buss & DeKlerk. Not for nothing does Open House Chicago call it ‘undoubtedly one of the most unique [churches] in Chicago.'” 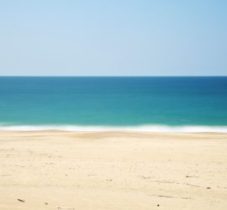 “Hymns in a Woman’s Life” – Drew Bratcher reflects on his grandmother’s life and the hymns she loved: “Among the first songs I remember hearing are the hymns my great-grandmother sang: ‘I’ll Fly Away,’ ‘Do Lord,’ ‘I Am Bound for the Promised Land.’ Doubtless I had heard other hymns before these, and still others with greater frequency, but to this day when I think of hymns, it is my great-grandmother who comes to mind. Her name was Elmay (pronounced ‘Elmy’). She lived in a holler in West Virginia, on land owned by the company for which my great-grandfather dug coal. We would see them twice, maybe three times, a year, once at their house on Thanksgiving, and at least once at my grandparents’ place in Nashville, where they visited for a couple of weeks each summer.” 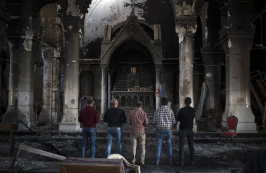 “For Iraqi priest, pope’s visit raises hope of restored trust between Christians and Muslims” – From Claire Giangravé at  Religion News Service: “In Iraq, the birthplace of Abraham, the patriarch of three major faiths, religion has rarely so divided the country, and Christians, descendants of one of their faith’s oldest communities, feel more threatened than they have in living memory. The Rev. Karam Qasha, a parish priest of the Chaldean Catholic Church of St. George in Telskuf, in northern Iraq, is among those hoping Pope Francis can mend the “broken trust” between the country’s Christians and Muslims and give courage to frightened Christians. Francis will visit Iraq March 5-8, making good on St. John Paul II’s attempt to travel to Iraq in 2000 when failed negotiations with the government of Saddam Hussein prevented John Paul from visiting.”

“Pew: How COVID-19 Changed Faith in 14 Countries” – FromJeremy Weber at Christianity Today: “Today, the Pew Research Center released a study on how COVID-19 affected levels of religious faith this past summer in 14 countries with advanced economies: Australia, Belgium, Canada, Denmark, France, Germany, Italy, Japan, the Netherlands, Spain, South Korea, Sweden, the United Kingdom, and the United States. ‘In 11 of 14 countries surveyed, the share who say their religious faith has strengthened is higher than the share who say it has weakened,’ noted Pew researchers. ‘But generally, people in developed countries don’t see much change in their own religious faith as a result of the pandemic.'” 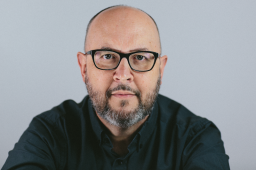 “Katharsis Culture” – Here’s Alan Jacobs with a helpful reframing of the many discussions of cancel culture: “A great many people have criticized the use of the term ‘cancel culture,’ but have done so for different reasons. One group of people simply wants to deny that cancellation is a widespread phenomenon; others are aware that something is going on but don’t think that ‘cancellation’ is the right way to describe it. I myself don’t have a problem with the use of the phrase, but I think there are more accurate ways of describing the very real phenomenon to which that phrase points. I think the two key concepts for understanding what is happening are katharsis and broken-windows policing.”

Music: Aklesso, “Wilderness,” from My Life is a Beautiful Mess