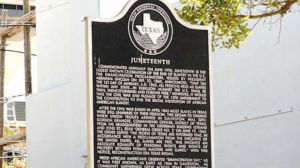 “Congress approves bill to make Juneteenth a federal holiday” – Kevin Freking at APNews: “The United States will soon have a new federal holiday commemorating the end of slavery. The House voted 415-14 on Wednesday to make Juneteenth, or June 19th, the 12th federal holiday. The bill now goes to President Joe Biden’s desk, and he is expected to sign it into law. Juneteenth commemorates June 19, 1865, when Union soldiers brought the news of freedom to enslaved Black people in Galveston, Texas — two months after the Confederacy had surrendered. That was also about 2 1/2 years after the Emancipation Proclamation freed slaves in the Southern states. It’s the first new federal holiday since Martin Luther King Jr. Day was created in 1983.” 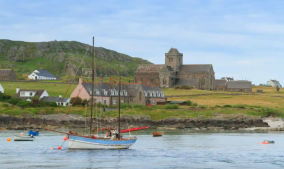 “Scotland’s ‘cradle of Christianity’ on Iona is saved by small mercies” – Harriet Sherwood in The Guardian: “A Christian community on a tiny Hebridean island which for centuries has attracted pilgrims from all over the world will reopen on Monday after a mammoth campaign raised £3.75m to save it from closure. The Iona community, centred on a Benedictine abbey in whose grounds John Smith, the late Labour leader, is buried, has spent the past three years making its buildings fit for the 21st century. The upgrade includes the installation of a renewable energy system and connection to superfast broadband. Princess Anne, patron of the appeal, will visit the island for a blessing ceremony, and thousands of people are expected to join in online celebrations of the successful appeal for the work.”

“Supreme Court rules in favor of Catholic foster-care agency, handing another win to religious rights” – Yonat Shimron at Religion News Service: “A federally funded foster and adoption agency that opposes same-sex marriage on religious grounds can be exempted from serving such couples, the Supreme Court ruled on Thursday (June 17). In a unanimous ruling, the justices once again showed they were receptive to claims by religious groups, in this case, Catholic Social Services, which refuses to work with same-sex couples. The agency contracts with the city of Philadelphia to screen potential foster parents. Beginning in 2018, the city of Philadelphia asked that all contractors follow the city’s anti-discrimination policies. Catholic Social Services along with two Catholic foster care parents — one named Sharonell Fulton — sued the city, claiming the free exercise clause in the First Amendment gives it the right to opt out of the nondiscrimination requirement. After a lower court and a federal circuit court ruled in the city’s favor, CSS appealed to the Supreme Court. The opinion, by Chief Justice John Roberts, reversed the circuit court ruling.”

“Chart: A Global Look at How People Spend Their Time” – Iman Ghosh at Visual Capitalist: “We all have the same 24 hours in a day, but we don’t spend them the same way. Some prioritize family time or household chores, while others cherish a good night’s sleep or seeing friends. This chart from Our World in Data compares the average time allocated across various day-to-day activities, from paid work to leisurely activities. The data for the 33 countries profiled come from the Organization for Economic Co-operation and Development (OECD)’s Time Use database, for ages 15 through 64 years old.” 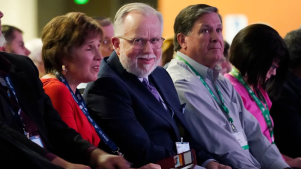 “Southern Baptists Elect Ed Litton as New President” – Kate Shellnutt in Christianity Today: “Pastor Ed Litton, championed by supporters as a force for gospel unity and racial reconciliation, was elected the next president of the Southern Baptist Convention (SBC), overtaking the candidate backed by a passionate faction of conservatives. Litton’s election is seen as a signal of the direction of the nation’s largest Protestant denomination, where infighting has broken out over approaches to race, abuse, and other issues while the Conservative Baptist Network raises alarms about liberal drift and “woke” theology. The close race also reveals how much ground the vocal group has come to hold in the SBC within a year and a half of its founding. ‘This vote … shows we desire a leader whose character, humility, and voice for unity represents us a whole over those who call for division,’ said Jacki King, who serves on the steering committee for the SBC Women’s Leadership Network.”

“Behold the Mandalorian: Meekness and Masculinity in Star Wars” – Josh Seligman in Plough: “Can masculinity be good? This is the question with which priest Noah Van Niel subtitles his recent article in Plough. I find an unexpected angle on this question in two father–son relationships in the Star Wars saga that illustrate meekness as a healthy model for manhood. Meekness is at the heart of The Mandalorian, the newest live-action Star Wars television series (spoilers ahead). The story follows Din Djarin, a bounty hunter hired to capture a child with mysterious powers. However, upon encountering “the Child” (whose real name is Grogu, although some viewers call him “Baby Yoda”), Djarin immediately bonds with him. When he realizes that his employers wish to harm Grogu, Djarin risks his security and life to protect the Child. Eventually, he receives instructions from a mentor to deliver Grogu to safety among the Jedi. In the course of completing this task, Djarin reluctantly transforms into a single father. The show depicts the daily grind of Djarin providing for Grogu, entrusting him to others’ care while earning their provisions, or establishing boundaries, as when he stops Grogu from naughtily eating the eggs of alien creatures.”

Music: Nina Simone, “Feeling Good,” from I Put a Spell on You.