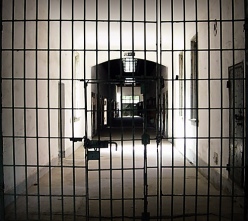 Walking out of prison is not something you do. Even with all of the mystique of stories about prison escapes, when it comes right down to it, prisons are places you go to but don’t get out of by your own will or effort.

But what if someone sets you free?

In this fifth week of the ||40days|| journey we are looking at following Jesus. In Matthew’s Gospel we read what appears to be an autobiographical account of Jesus calling Matthew to follow Him. Matthew is a tax collector for the Romans who, like most in his trade, was likely enriching himself at the expense of his own people. He was not liked by the Romans because he was a Jew, while at the same time he was not liked much by the Jews because he was seen a traitor and a thief. Matthew is caught up in a prison both of his own choices and his circumstances. It is at this point that we read about a very straightforward encounter between Jesus and Matthew:

As Jesus went on from there, he saw a man named Matthew sitting at the tax collector’s booth. ‘Follow Me,’ He told him, and Matthew got up and followed Him. (Matthew 9:9)

Sometimes the prisons that hold us are not physical but spiritual realities with personal and social impact. END_OF_DOCUMENT_TOKEN_TO_BE_REPLACED