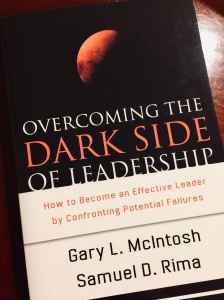 Continuing with my exploration of Gary L. McIntosh and Samuel D. Rima’s Overcoming the Dark Side of Leadership, in the second part of the book the authors give attention to what they call “five dark-side issues experienced most often by leaders” (16). They group those dark-side issues into individual chapters that describe in greater detail what each of these issues might do to the leader. Here is a summary of each of those five types:

Have you experienced this sort of leader in your life, particularly in your church? What might it look like for you to learn from that experience?

Now, look in the mirror for awhile, and consider what your own dark side tendencies might be. How can you bring those to God today?