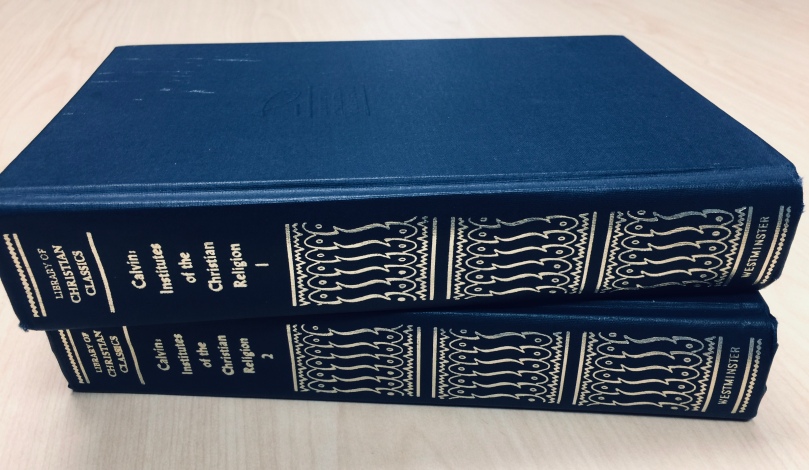 I came across this the other night as I was reading through John Calvin’s Institutes of the Christian Religion. This overflowing reflection on Christ’s person and work caps off Calvin’s theological reflections on The Apostles’ Creed.

We see that our whole salvation and all its parts are comprehended in Christ [Acts 4:12]. We should therefore take care not to derive the least portion of it from anywhere else. If we seek salvation, we are taught by the very name of Jesus that it is ‘of him’ [1 Cor. 1:30]. If we seek any other gifts of the Spirit, they will be found in his anointing. If we seek strength, it lies in his dominion; if purity, in his conception; if gentleness, it appears in his birth. For by his birth he was made like us in all respects [Heb. 2:17] that he might learn to feel our pain [cf. Heb 5:2]. If we seek redemption, it lies in his passion; if acquittal, in his condemnation; if remission of the curse, in his cross [Gal. 3:13]; if satisfaction, in his sacrifice; if purification, in his blood; if reconciliation, in his descent into hell; if mortification of the flesh, in his tomb; if newness of life, in his resurrection; if immortality, in the same; if inheritance of the Heavenly Kingdom, in his entrance into heaven; if untroubled expectation of judgment, in the power given to him to judge. In short, since rich store of every kind of good abounds in him, let us drink our fill from this fountain and from no other. Some men, not content with him alone, are borne hither and thither from one hope to another; even if they concern themselves chiefly with him, they nevertheless stray from the right way in turning some part of their thinking in another direction. Yet such distrust cannot creep in where men have once for all truly known the abundance of his blessings.