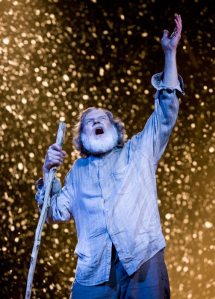 In Shakespeare’s powerful drama King Lear there is a moving scene where King Lear, bereft of the daughter he loves most, Cordelia, and being controlled by his two other self-serving daughters, Goneril and Regan, rushes out into a tempestuous storm.[1]

As the dark storm rages about him, Lear rages about his own suffering and loss. He calls upon the wild thunder and lightning to destroy him and the grief-filled world as he wanders wildly through the darkness. Eventually, King Lear goes mad with grief and confusion in this episode. He calls out for justice, meaning, and resolution, but finds none in the isolation of the storm. In some ways, King Lear’s struggle parallels that of Job. They are both looking for meaning in their suffering.

I’m sure that we’ve all either experienced dark times or been around others who have.  It is one thing to experience a brief adversity or set-back, but another thing to endure ongoing suffering for weeks, months, or years.

“We Have Much Yet to Learn…”
Remember that Job suffered great loss. He loses all of his children—7 sons, 3 daughters—and all of his belongings—7,000 sheep, 3,000 camels, 500 oxen, 500 donkeys. All he owned and love is gone in one stunning afternoon.

The Lord gave and the Lord has taken away; may the name of the Lord be praised. (Job 1:21)

Why do we need the rest of this book? As one biblical scholar writes, it is because we “have much yet to learn about suffering and about God.”

What Friends Are These?!
When Job’s friends arrive the best thing that they do is to sit silently with him in his loss and suffering. When they begin to open their mouths, things immediately go south. Their understanding of suffering and God’s role in suffering could be summarized most succinctly in the following ideas:

Job, in their eyes, is encountering suffering, adversity, and dark times as a result of sin in his life which God wants to correct. If only Job were to confess his sins and turn back to God, then he would be restored. But there is something about the theological truth his friends offer to Job which doesn’t ring true.

Job’s Growth through Suffering
While the ensuing speeches don’t reveal much further about Eliphaz, Bildad, and Zophar, they do show us something about Job. He begins in despair, cursing the day of his birth and his continued existence. He complains of the absence of God’s justice. He laments his suffering and longs for the finality of death without a future.

But as the rounds of speeches continue, while not letting go of his call for God’s justice, Job’s perspective begins to change. The pinnacle of this is found in chapter 19:

I know that my redeemer lives, and that in the end he will stand on the earth. And after my skin has been destroyed, yet in my flesh I will see God; I myself will see Him with my own eyes—I, and not another. How my heart yearns within me! (19:25-27)

And For Us…
Now, what can we gather from Job’s experience of suffering and wrestling with God before our eyes in this book? If we do have much to learn about God and suffering, then what do we need to glean from Job today?

Hopefully, like Job, we too will trust in God’s ultimate salvation even as we wrestle with our suffering.

4 thoughts on “Wrestling Lessons with Job: encountering God in our suffering”