One of the most striking aspects of the writing and teaching of Dallas Willard is his ability to open up with fresh perspective what it means to be a disciple of Jesus. One of Willard’s most powerful contributions to disciple is found in his explanation of Jesus’ well-known invitation:

Come to me, all you who are weary and burdened, and I will give you rest. Take my yoke upon you and learn from me, for I am gentle and humble in heart, and you will find rest for your souls. For my yoke is easy and my burden is light. (Matthew 11:28-30)

Willard refers to our discipleship response to this invitation as living in “the secret of the easy yoke” in his book The Spirit of the Disciplines. As I am currently re-reading Renovation of the Heart, I came across this basic description of what Willard sees as the essence of discipleship in the easy yoke of Jesus. I hope it speaks to you as much as it did to me.

Jesus heard the soul’s cries from the wearied humanity he saw around him. He saw the soul’s desperate need in those who struggled with the overwhelming tasks of their life. Such weariness and endless labor was, to him, a sure sign of a sou not properly rooted in God—a soul, in effect, on its own. He saw the multitudes around him, and it tore his heart, for they were ‘distressed and downcast’ like ‘sheep without a shepherd’ (Matthew 9:36). And he invited such people to come and become his students (‘learn of me’) by yoking themselves to him—that is, letting him show them how he would pull their load. He is not ‘above’ this, as earthly ‘great ones’ are, for he is meek and lowly of heart (Matthew 11:28-30).

His own greatness of soul made meekness and lowliness the natural way for him to be (Philippians 2:3-11). Being in his yoke is not a matter of taking on additional labor to crush us all the more, but a matter of learning how to use his strength and ours together to bear our load  and his. We will find his yoke an easy one and his burden a light one because, in learning from him, we have found rest to our soul. What we have learned is, primarily, to rest our soul in God. Rest to our soul is rest in God. My soul is at peace only when it is with God, as a child with its mother.

What we most learn in his yoke, beyond acting with him, is to abandon outcomes to God, accepting that we do not have in ourselves—in our own ‘heart, soul, mind, and strength’—the wherewithal to make this come out right, whatever ‘this’ is. Even if we ‘suffer according to the will of God,’ we simple ‘entrust our souls to a faithful Creator in doing what is right’ (1 Peter 4:19). Now, this is a major part of that meekness and lowliness of heart that we also learn in his yoke. And what rest comes with it!

[From Dallas Willard, Renovation of the Heart: Putting on the Character of Christ (Colorado Springs, CO: NavPress, 2002), 209.]

One of the most gripping commendations Jesus ever offered was about John the Baptist when He said, “I tell you, among those born of women there is no one greater than John” (Luke 7:28). There was really no one quite like John, and Jesus recognized that.

Of course, the other part of that statement was this: “yet the one who is least in the kingdom of God is greater than he.” John knew who he was and also knew who he wasn’t, and that shaped the way he lived.

At one point in his ministry, John said to a group of his disciples and gathered onlookers: “You yourselves can testify that I said, ‘I am not the Messiah but am sent ahead of him'” (John 3:28). John knows who he is and knows who he is not.

John the Apostle sets us up for this in the first chapter of his gospel when he says that John the Baptist is not “the Light”:

There was a man sent from God whose name was John. He came as a witness to testify concerning that light, so that through him all might believe. He himself was not the light; he came only as a witness to the light. (1:6-8)

Later on, when John is questioned by religious leaders, he knows that he is not the Messiah,  Elijah or the long-awaited Prophet:

Now this was John’s testimony when the Jewish leaders in Jerusalem sent priests and Levites to ask him who he was. He did not fail to confess, but confessed freely, ‘I am not the Messiah.’

Finally they said, ‘Who are you? Give us an answer to take back to those who sent us. What do you say about yourself?’

John replied in the words of Isaiah the prophet, ‘I am the voice of one calling in the wilderness, “Make straight the way for the Lord.”‘ (John 1:19-21)

Not only that, John knew that Jesus was the Messiah, and that he, John, was not Jesus:

John knew that he was not the awaited one, but that Jesus was the one the world was waiting for.

So, when John the Baptist’s followers come to him feeling out of sorts because Jesus’ ministry is increasing, John is not really bothered. In fact, he knows this is the way things are supposed to be. He knows that all of what he is doing is really about Jesus.

John the Baptist is a powerful example for all of us who follow Jesus. He reminds us that not any one of us is the Messiah, and we should live accordingly. I am not the Messiah. You are not the Messiah. We cannot solve everyone’s problems, be everywhere at once, or be the one to save the world. That was Jesus’ job. Believing this and live out of this belief  is a significant part of our discipleship.

We are not here to replace Jesus, but to display Jesus in our life on earth. The difference seems slight, but it is gargantuan in practice. In our lives we are not trying to be the Messiah, we are trying to direct people to the Messiah.

John the Baptist knew who he was and who he was not, and it set him free to minister as God would have him regardless of the outcome. 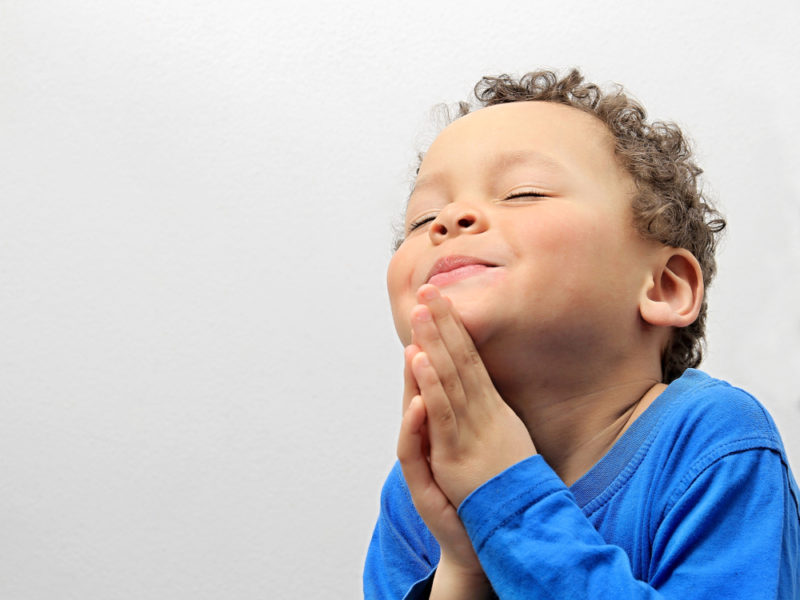 Now to him who is able to do immeasurably more than all we ask or imagine, according to his power that is at work within us, to him be glory in the church and in Christ Jesus throughout all generations, for ever and ever! Amen.
(Ephesians 3:20-21)

I often say, in reference to these verses from Ephesians 3, that I have an overactive imagination and, therefore, could imagine God’s ability to do quite a bit!

In some ways, Paul’s words here put us very much in mind of being children before our Father. With naive humility we approach the Father to ask big and bold things.

Of course, the Father may respond however He would like. He may astound us with His powerful answer. He may sift through our silly requests to do what is truly wise, right, and needful. He may gently or sternly respond to us so we learn how to ask for what He truly desires to give. Just because we imagine it does not mean it is the right or appropriate thing to ask for. However, God is always Father-like in His approach to us in prayer.

Overall, the aim of prayer here in Ephesians 3 is that believers become rooted in God’s love, know God’s love, and be filled with the fullness of God. It is out of this place that we boldly approach God as our good Father who always exceeds what we ask for.

Throughout our new series “The Final Word: Knowing Christ through Hebrews,” I am writing prayers related to the text on which we are preaching each week. This prayer is drawn from Hebrews 7:1-25. The complete list of prayers inspired by Hebrews is included at the bottom of this post. You can also view my message from this passage “Unlike Any Other,” here.

Father in heaven,
You made humanity in Your image
that we might show forth who You are to the world.
Thank You that although we fell into sin
and failed in our created calling,
You sent Your Son, Jesus, to redeem us
as both the once-for-all Sacrifice
and the Eternal Priest who offers that great gift.
Our lives have been bought with a price –
they are Yours, our God –
so fill us with Your Holy Spirit
that we might live in the fullness of Your power
and display the fullness of Your character
to the far reaches of this world
until the fullness of Your kingdom.

All this we pray, through Jesus Christ your Son our Lord
to whom, with You and the Holy Spirit
be honor and glory, now and forever.
Amen.

Join us for worship with Eastbrook Church through Eastbrook at Home at 8, 9:30, and 11 AM as we continue our series “The Final Word: Knowing Christ through Hebrews.” This weekend I will preach from Hebrews 7:1-25. Follow along with the entire series here. Access the downloadable bulletin, sermon notes, and sermon discussion guide here.

We also begin in-person services at 9:30 AM this weekend at the Eastbrook Campus, but you do need to RSVP ahead of time this week and in coming weeks. Find out more info here.

Don’t miss the chance to join in with a virtual small group discussing the sermon every Sunday at 11 AM. More info here.

Each Sunday at 8, 9:30, and 11 AM, you can participate with our weekly worship service at home with your small group, family, or friends. This service will then be available during the week until the next Sunday’s service starts. You can also access or download the service directly via Vimeo or the Eastbrook app.

If you are not signed up for our church emailing list, please sign up here. Also, please remember that during this time financial support for the church is critical as we continue minister within our congregation and reach out to our neighborhood, city, and the world at this challenging time. Please give online or send in a donation to support the ministry of Eastbrook Church.