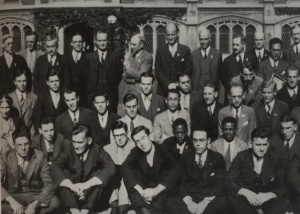 Not too long ago I read Reggie Williams‘ thought-provoking book, Bonhoeffer’s Black Jesus: Harlem Renaissance Theology and an Ethic of Resistance. This is an outstanding book and would easily fit within my top five recommended reads about the life and work of Dietrich Bonhoeffer. There is so much to say from this book, but in our present moment I wanted to share this extended reflection by Williams from one of the final chapters of the book here. In our present tensions, we must understand that a shift must occur for the church, particularly for white Christians. We must enter into the experiences of others, especially our African American brothers and sisters, in a way that changes us to become more like Jesus. It begins with seeing God more clearly, then reading the Bible more fully through other cultural lenses, then seeing ourselves and others differently in ways that leads to concrete action for the sake of the kingdom of God.

The hermeneutical process that was set in motion by Dietrich Bonhoeffer’s formative German nationalist environment had been disrupted by immersion in a different community. During the Harlem Renaissance and at the beginning of the Great Depression, Bonhoeffer entered into the ‘church of the outcast of America’ in Harlem. He came to Harlem not as the professor come to give oppressed people The benefit of his knowledge; Bonhoeffer allowed himself to be vulnerable in the Harlem community, which was very different from his own German one, by an incarnational practice. In Harlem he learned from Powell’s ministry and was exposed to a black dialectical ecclesiology and to Powell’s interpretation of a model church community. That encounter exposed the limitations of Bonhoeffer’s Volk-centered loyalties, making him vulnerable to the influence of a different worldview and opening him up to important revisions in his faith. When Bonhoeffer shared with his friend Myles Horton the interrupting ‘Amens’ and ‘Hallelujahs’ that he experienced in the Abyssinian church service, Myles was surprised by the different demeanor that his German friend exhibited. It was the different Bonhoeffer, in the year following his encounter with black Baptists, whose piety sometimes appeared ‘too fervent’ to his students. One of Bonhoeffer’s Berlin students recalled the directness and ‘simplicity’ with which Bonhoeffer ‘asked us whether we loved Jesus.’ That different Bonhoeffer was the one who would later speak out against Nazi racism and become the celebrated author of Creation and Fall, Life Together, Discipleship, and Ethics.