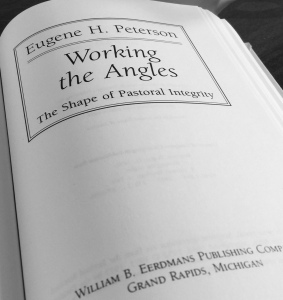 For the majority of the Christian centuries most pastors have been convinced that prayer is the central and essential act for maintaining the essential shape of the ministry to which they were ordained.

With this strong word, Eugene Peterson begins his exploration of the first of the three angles of pastoral ministry: prayer. Peterson suggests that, in contrast to previous centuries, pastors of our current age “don’t view prayer as the central and essential act that keeps pastoral work true to itself, centered in word and sacrament” (26). He wonders aloud if conditions have changed today or if theological developments have led us to this change? Neither of those is really true. Instead, we have “let ourselves be distracted, diverted, and seduced” by a slippery loss of the best of Greek wisdom and Hebrew spirituality.

Drawing on the Greek myth of Prometheus, Peterson suggests that we have lost a sense of our own limitations, including mortality, and the sense of danger produced by blind ambition. Like Prometheus, who introduced the technology of the gods (fire) to humanity and unshackled human beings from a sense of necessary limits, the modern secular age has delivered to us ever-improving technologies while simultaneously convincing us we can overcome all of our limits, including death. “We ourselves have become Promethean—working in a good cause, compassionately helping people, but uncritically using the means offered by the world” (31). This Promethean spirit has infected the church and pastoral ministry. We are enamored with utilizing the latest and greatest technologies, both in our personal work and our churches, without often giving much thought to how this blind acceptance shapes us. Likewise, we rarely regard our ministry as preparing congregants for “holy living and holy dying.” Instead, we aim more at living ‘healthy’ lives as long as possible without much thought to the dying part.

Right alongside this Promethean challenge, Peterson highlights the loss of the best of Hebrew spirituality, of which prayer is the center. Tracing higher criticism’s sculpting of our approach to Scripture, Peterson focuses on Julius Wellhausen as a representative of the scholars who unintentionally evacuated prayer from its central place in the worship-focused life of Israel. Wellhausen did this by retelling Hebrew history, from the patriarchs through the prophets and on to the exilic restoration, through the lens of historic development of religions. This shift in the view of Israel unintentionally charted a noticeably different course for the education of pastors, leading to the exaltation of two forms for ministry: “the prophetic pastor of action and the managerial pastor” (38). This theological re-creation is like a “modern Prometheus” (to steal a phrase from Shelley), leaving us with a monster devoid of real life and love.

The implication of this for pastoral work is plain: it begins in prayer. Anything creative, anything powerful, anything biblical, insofar as we are participants in it, originates in prayer. Pastors who imitate the preaching and moral action of the prophets without also imitating the prophets’ deep praying and worship so evident in the Psalms are an embarrassment to the faith and an encumbrance to the church

[This post continues my reflections on Eugene Peterson’s Working the Angles: The Shape of Pastoral Integrity, which began here. You can read all the posts here.]