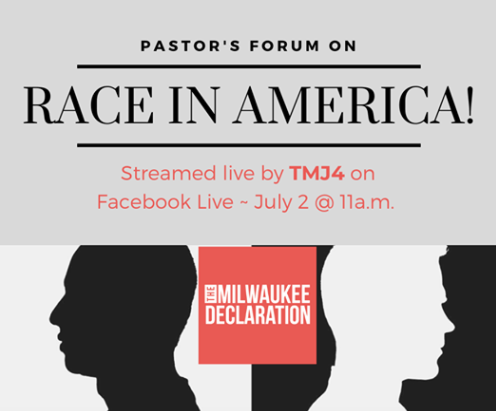 Updated: You can watch the recording of this forum here.

A few weeks ago my friend Kurt Owens reached out to me about joining a panel discussion of pastors from The Milwaukee Declaration discussing race in America in light of the killing of Ahmaud Arbery and George Floyd.

After extremely positive responses to that first conversation, we decided to continue with follow-up conversations (Watch “part 1,” “part 2,” and “part 3” at the Milwaukee Declaration Facebook page). Join us today at 11 AM (CST) for “part 4” of the Pastor’s Forum on Race in America with me, Kurt Owens, Peter Borg, Kurt Boyd, Jay English, Arnitta Holliman, Kevan Penvose here. This time Shannon Sims of TMJ4 will moderate and this will be live streamed at TMJ4’s Facebook page.

As part of previous gatherings for the Milwaukee Declaration we assembled a “Next Steps” guide of resources for furthering the conversation. I am again including that below with some updates with more recent resources.

Books
By Dr. King
Strength to Love
Why We Can’t Wait
Where Do We Go from Here: Chaos or Community?

Milwaukee and Housing
Selma of the North: Civil Rights Insurgency in Milwaukee by Patrick D. Jones
Evicted: Poverty and Profit in the American City by Matthew Desmond
The Color of Law: A Forgotten History of How Our Government Segregated America by Richard Rothstein

Race and Inequality
Racism without Racists: Color-Blind Racism and the Persistence of Racial Inequality in America by Eduardo Bonilla-Silva
The Origins of the Urban Crisis: Race and Inequality in Postwar Detroit by Thomas Sugrue
The New Jim Crow: Mass Incarceration in the Age of Colorblindness by Michelle Alexander
“The Case for Reparations” by Ta-Nehisi Coates

Race and Faith
The Cross and the Lynching Tree by James H. Cone
The Color of Christ: The Son of God and the Saga of Race in America by Edward Blum and Paul Harvey
A Stone of Hope: Prophetic Religion and the Death of Jim Crow by David Chappell
White Awake: An Honest Look at What It Means to Be White by Daniel Hill
The Christian Imagination: Theology and the Origins of Race by Willie James Jennings
Many Colors: Cultural Intelligence for a Changing Church by Soong-Chan Rah
The Next Evangelicalism: Freeing the Church from Western Cultural Captivity by Soong-Chan Rah
Roadmap to Reconciliation 2.0: Moving Communities into Unity, Wholeness and Justice by Brenda Salter-McNeil
Beyond Colorblind: Redeeming Our Ethnic Journey by Sarah Shin
Divided by Faith: Evangelical Religion and the Problem of Race in America by Christian Smith and Michael O. Emerson
Rediscipling the White Church: From Cheap Diversity to True Solidarity by David W. Swanson
The Color of Compromise: The Truth about the American Church’s Complicity in Racism by Jemar Tisby