This past weekend at Eastbrook Church, I made a shift in our worship service order where we will recite the Apostles Creed on the first weekend of each month before participating in communion. As a non-denominational church, we are not alone in rarely reciting creeds. However, here is my apology for regular recitation of the creed together in corporate worship. I offered a slightly different version of this in the conclusion of my message this past weekend, “The Joy of Faith.” 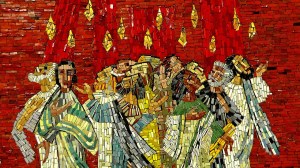 One of the most important ways we announce that we are living by a different story is to rehearse – to say again and again – to declare – that our story is something other than the story of this earth.

There is a word for that in Christian practice and history: an affirmation of faith or declaration in a creed. So, I am going to have us do something different as a church here at Eastbrook. I want to have us regularly declare that we are living by a different story. When we gather on the first weekend of every month and celebrate the communion meal, I want us to take a stand together around the truth of the gospel revealed in Jesus Christ. I want us to announce to a listening world that Jesus is Lord and we are living for God’s good life and no other counter claims.

The Apostles Creed is the most widely used and consistently affirmed summary statements of faith within the global church of Jesus Christ.[1] Although its exact origins cannot be traced, the Apostles Creed in its present form is first found in a document from c. 750. The basic concepts and structure of the Apostles Creed is found as early as c. 340 in what is known as the Old Roman Creed.[2] “Teachers as varied as Augustine, Thomas Aquinas, and Luther have held the Apostles’ Creed remains the best condensed statement of Christian faith and the most reliable way to learn the heart of faith.”[3]

The Apostles Creed echoes the Holy Trinity in its written structure and follows the flow of the biblical narrative. While originally used to instruct candidates for baptism, the creed eventually became part of the service of worship during times of Christological controversy. The creed, whether the Apostles Creed or the Nicene Creed, usually follows the sermon as a responsive affirmation of faith.[4] In many services, this leads into a time of prayer, whether the Lord’s Prayer or the prayers of the people, before participation in communion.[5] This was true even in the early church worship services of the third and fourth centuries: “they recited the Creed before the Lord’s Prayer as a preparation for communion.”[6]

In our increasingly confused and divided times, the church is losing its center, allowing political feuds and allegiances, tense social issues, or any number of other things to steal in as defining aspects of our identity. However, the action of baptism reminds us that there is no Lord but Jesus and we are dead to ourselves, sin, and the devil in order to be made alive to God in Christ by the power of the Holy Spirit. “We were therefore buried with him through baptism into death in order that, just as Christ was raised from the dead through the glory of the Father, we too may live a new life” (Romans 6:4). When we draw near to the communion table, we are reminded that no matter where we have come from – socially, politically, ethnically, educationally, economically – we are now one in Jesus Christ. “Because there is one loaf, we, who are many, are one body, for we all share the one loaf” (1 Corinthians 10:17). “There is neither Jew nor Gentile, neither slave nor free, nor is there male and female, for you are all one in Christ Jesus” (Galatians 3:28). At communion, Jesus is the center and as we draw near the table to eat with Christ and one another we are expressing our allegiance to Him over all and our fellowship with one another through Him.

There is no better time than our celebration of communion to affirm our faith together. As Jamie Smith writes about the creed in his book Desiring the Kingdom:

In these divided days we need a tangible way to bear witness to our faith and unity in Jesus Christ. So, I am recommending that we begin corporately reciting the Apostles Creed on a monthly basis as part of our communion celebration on the first weekend of each month. Immediately after the sermon, we will invite the congregation to stand and recite the Apostles Creed before we draw near to the communion table in prayer. This is a corporate decision of the will and an affirmation of faith that draws us together as we fix our eyes on Jesus, the author and perfecter of our faith.

[5] As in the Holy Eucharist services and Morning and Evening Prayer services in The Book of Common Prayer; accessible online here: https://www.bcponline.org.

2 thoughts on “The Apostles Creed: An Apology for Regular Use”