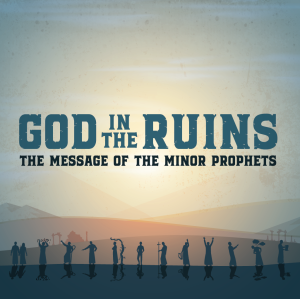 This past weekend at Eastbrook I continued our series on the message of the minor prophets, “God in the Ruins,” by looking at the first five chapters of the book of Micah.

Micah prophesied to both the northern and southern kingdoms during the reigns of kings Jotham (742-735 BC), Ahaz (735-715 BC), and Hezekiah (715-686 BC). He is mentioned in the book of Jeremiah as one who spoke during Hezekiah’s reign (Jeremiah 26:18). He witnesses the fall of Samaria and the northern kingdom in 722 BC, but also speaks about the coming exile for the southern kingdom, which happens after the time of his ministry. Micah hailed from Moresheth Gath, about 20 miles southwest of Jerusalem. His name literally means “Who is like Yahweh?” and his prophecies focus on both the doom coming upon a straying people and the hope that God will bring.

You can watch my message from this past weekend and follow along with the message outline below. You can also engage with the entire series on the minor prophets here or download the Eastbrook mobile app for even more opportunities to connect.

“But you, Bethlehem Ephrathah, though you are small among the clans of Judah, out of you will come for me one who will be ruler over Israel, whose origins are from of old, from ancient times.” (Micah 5:2)

The Good News of Micah and Messiah Jesus